Please login to see the full Calendar including member only events such as field trips, educational classes, and Mycology camps. 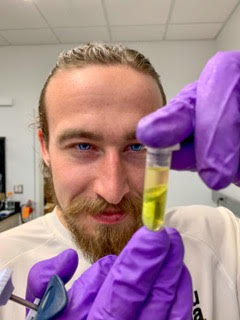 Dylan Baldassari, a Master of Science (M.S.) student at the University of Wisconsin-La Crosse, grew up spending large portions of his time in the woods, marshes, and prairies of southern Wisconsin. Being outside, and learning about the natural world from books, magazines and mentors became his passion.

This passion was the compass for his life, and led him to pursue a Bachelor of Science (B.S.) in biology, with minors in chemistry and statistics, at UW-La Crosse. While working on his B.S., he took Tom Volk’s mycology and medical mycology courses. From that point on, he was hooked on fungi. His captivation with fungi opened the door to a teaching assistant position in Volk’s classes, and subsequent work on his M.S. with Tom Volk and Todd Osmundson’s guidance.

Dylan’s master’s thesis research investigates a cryptic group of fungi known as fungal endophytes―fungal symbionts that live inside the leaves of all plants, and in many cases, have been shown to have powerful effects on a plant’s survival and immune system.

This may prove to be the case for the rapidly declining whitebark pine, a keystone in the Rocky Mountains and a candidate for Endangered Species Act (ESA) protection. His work aims to understand the relationship between fungal endophytes, whitebark pine, and whitepine blister rust, an invasive fungal pathogen decimating whitebark populations.